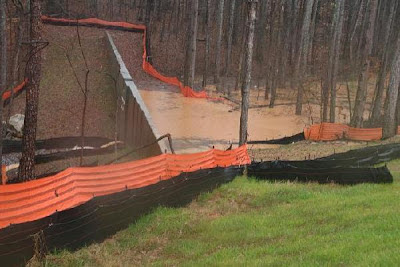 A quick note from the folks at bhalliance.org.

This picture depicts a wall built across a stream in Wieland's Braeland development at Crabapple, the developer is now requesting a variance for this wall to remain in the stream buffer, to encroach into the 50' undisturbed stream bank buffer. The variance that the applicant is seeking is actually "after the fact" and should be denied, there is no hardship. The developer has admitted fault for building the wall and causing tremendous damage to the adjacent properties, streams and the lake at Six Hills. The project was permitted by Fulton County in late 2006 prior to the formation of the City of Milton, the developer is stating hardship and that the wall is built according to the plan, but that the stream moved. Staff notes, "we disagreed since there is no evidence that the stream has moved and have held to the position that this constituted an encroachment into the undisturbed stream buffer."

Multiple City, State and Federal code violations have been filed:

May 5, 2008-US Army Corps of Engineers a cease & desist order for failure to submit the required permit and constructing a retaining wall & placing fill material in a perennial stream.Stream buffers are the interface between the water and the land, and they serve many functions making them valuable to people and wildlife. Violation of the Milton stream buffer requirements sets a negative precedent, buffers are meant to protect the community.

Voice your opinions on this and other important issues to the Mayor, City Council and Board of Zoning Appeals, our stream buffers must be maintained.