Car versus bike crash leads to driver versus rider debate. 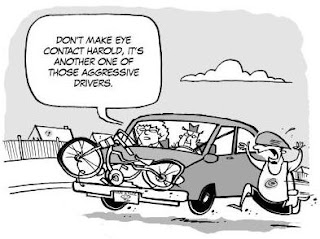 NOTE: Due to the popularity of the story posted earlier regarding a cyclist wreck which involved a vehicle in Augusta, we thought the follow up article might be of interest to our readers.

By Ty Tagami
The Atlanta Journal-Constitution

A crash involving an SUV and a group of cyclists near Augusta has led to a cultural collision between people who want to use the roads for exercise and others who just want to get where they're going.

Daniel Johnson, 41, was driving near his home on rural Beech Island Avenue in South Carolina last week when he ran into a group of recreational cyclists from Augusta.

The crash injured five of the bike riders, sending one to the hospital with a brain injury.

Matthew Burke, 37, an orthopedic surgeon from Fort Gordon who survived a tour of duty in Iraq in 2009 and became a father this year, was fighting for his life after the recreational ride.

While he lay in the hospital, proponents and opponents of cycling were clashing on the radio and on the Internet. Many noted the inherent danger when cars must share the road with slower-moving bicycles. Others pointed out that drivers are obliged to control their vehicles and give cyclists wide berth when passing.

It's gotten downright nasty, with people from Beech Island complaining that the Augustans should stay in their own state: "The bike riders broke the law and this poor driver is paying the price. If I was on the jury working this case I could not find him guilty. No way in hell," one person wrote in an anonymous post on the website of The Augusta Chronicle. "I live in Beech Island and I love this place, I can understand why people want to ride here yet, I just can't bring myself to care about bike riders."

Beech Island Avenue is curvy in parts and straight in others. Johnson's father, also named Daniel, has openly questioned why the riders chose that road, telling the Chronicle that it is "crooks and turns, and it's narrow."

Scott Moore was among the injured cyclists. He told the AJC Friday that the criticism has been hard to take. He said the crash occurred on a straight section of the two-lane road and that the group was riding two abreast at the side of the road and that it was a straight stretch.

Moore, 39, said he and the other cyclists just want to stay physically fit and that the South Carolina roads, which are an easy jaunt from downtown Augusta, offer scenic and challenging terrain.

"It's almost like we're portrayed as a bunch of Hell's Angels terrorizing the roads of Beech Island," he said.

Moore was riding alongside Burke at the back of the group of about 15 riders when Johnson hit them from behind with a Dodge Durango.

The collision left Moore with bruises and scrapes on the left side of his body. He landed on the road and when he looked up, he saw that Burke had been tossed about 40 feet ahead. He limped over to Burke and saw his chest heaving, and his face covered in blood.

"I just knelt down, put my hand over his leg and prayed for him," Moore said. "I thought he was dead."

Lance Cpl. Josef Robinson of the South Carolina Highway Patrol told the AJC Friday that no charges have been filed against the driver. Robinson previously said that Johnson admitted he wasn't paying attention when he drove into the cyclists.

Investigators told Robinson that Johnson was "distracted" at the time of the crash, but they didn't elaborate, Robinson said.

Moore said the driver could just as easily have hit a pedestrian, yet the incident has led him to reconsider the risks of cycling.

A father of five, he said he is not sure he'll ride a bike out on the open the road again. His 12-year-old son was with his wife when she collected him from the crash scene.

"He saw the blood on the road, and that really tore him up," Moore said.

"I used to be a cop. I've been involved in a lot of dangerous things. But this was the first near-death experience I've had."
Posted by Accessmilton Admin at Friday, October 08, 2010