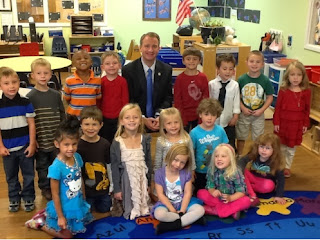 “Georgia’s Pre-K program is doing a remarkable job preparing children for grade school and beyond by establishing healthy learning habits at an early age,” said Senator Albers. “I am especially proud of the hard work and dedication of parents and teachers for their continued support and efforts to support early childhood achievement.”

Sponsored by Voices for Georgia’s Children and Pre-K partners throughout the state, Georgia Pre-K Week focuses on the important role of Georgia’s Pre-K program on future academic achievement.

While visiting The Goddard School, Senator Albers read two of his favorite books about firefighters, took a tour of the facility, spoke with teachers and staff, and received an up-close look at the many ways the center is supporting early childhood education.

“Georgia’s Pre-K program is an exceptional program that can serve as a model for our country,” said Pat Willis, Executive Director of Voices for Georgia’s Children. “About 84,000 four year olds in Georgia benefit from this remarkable program, a milestone in the critical phase of education that takes place from birth to age 8.”

Senator Albers was one of nearly 150 state officials who visited some of the approximately 3,800 Pre-K classrooms located in all 159 counties across Georgia.

# # #
Sen. John Albers serves as Chairman of the State Institutions and Property Committee.  He represents the 56th Senate District which includes portions of North Fulton and Cherokee counties. He may be reached at his office at 404.463.8055 or by email at john.albers@senate.ga.gov.
Posted by Accessmilton Admin at Thursday, October 24, 2013