Did you lose a bet? Alpharetta mayor gets cafeteria duty. 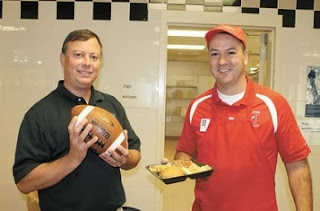 For the second year in a row, Milton's Mayor Joe Lockwood and Alpharetta's Mayor David Belle Isle have wagered on the outcome of the Milton High and Alpharetta High football game.

The two teams played each other Aug. 30, when Milton beat Alpharetta in overtime.

Just like last year, the loser – Belle Isle again – had to serve lunch at the winner's school. Always a good sport, Belle Isle donned an apron and plastic gloves Oct. 9 and got to work dishing out vittles to MHS kids while Lockwood happily cheered him on, all in good fun.

"When you look at the Milton and Alpharetta game, everyone is a big community," said MHS Principal Cliff Jones.