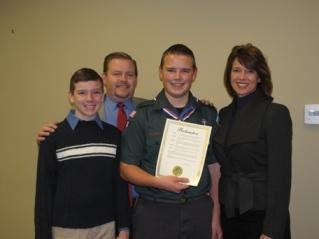 The Wynne Family shows off the proclamation Jason, center,
was given at the Dec. 21 council meeting.

Wynne, a 17-year-old Milton High School senior, has been a Boy Scout for nine years. His family recently moved to Milton from Massachusetts, where he completed the work on his Eagle Project. There he posted mile markers on a nature trail for the citizens of Marlboro, Mass. He was awarded the Eagle rank while living in Milton.

Wynne is a member of Venture Crew 347, sponsored by the Milton Ward of the Church of Jesus Christ of Latter Day Saints. He is considering attending Brigham Young University in the fall.

Great...another yankee in a subdivision