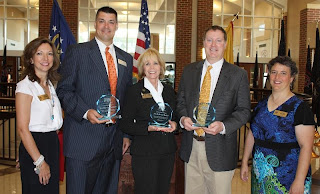 Crabapple Crossing Elementary School Principal George Freiberger was named an Outstanding Principal, one of just four in the state. The award recognizes principals who provide excellent support of local PTAs by personally participating in the organization and its programs and by encouraging parent participation.

Milton also received the Georgia PTA Visionary Award for demonstrating an "above and beyond" approach to addressing and resolving community issues and concerns.

Finally, out of the 26 Georgia PTA councils, the North Fulton Council of PTAs (NFC PTA) was one of two councils with a perfect score and ultimately received the Georgia PTA Top Council Exemplary Award. During the 2012-2013 school year, NFC PTA was the largest PTA membership council within Georgia, representing nearly 15 percent of all Georgia PTA membership.
Posted by Accessmilton Admin at Saturday, August 03, 2013