Two badly hurt when Ferrari crashes and burns in Alpharetta. 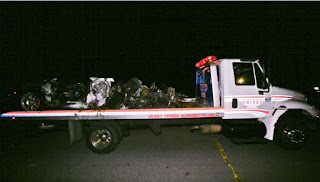 By Mike Morris The Atlanta Journal-Constitution

Two people were seriously injured early Friday when a Ferrari ran off an Alpharetta road and burst into flames.

Alpharetta police spokesman George Gordon told the AJC that authorities initially got a call just before 4 a.m. about a possible brush fire on Webb Bridge Road near Alpharetta High School.

“Unfortunately, when our police officers arrived on the scene, they discovered the fire was actually caused by a single-vehicle crash,” Gordon said. “They found a red Ferrari that was on fire approximately 60 yards into a wood line.”

Gordon said that the two men inside the Ferrari had crawled out of the car, but had sustained “significant” burn injuries. They were airlifted to Grady Memorial Hospital in critical condition, he said.

“The vehicle itself is totally destroyed,” Gordon said. “It went completely up in flames and it basically is not recognizable as a vehicle at this point.”

The identities of the 19-year-old driver and his 21-year-old passenger have not been released.

“We know that a high rate of speed was a contributing factor in this crash,” Gordon said.

It was not immediately known what model the Ferrari was, but the Italian cars start at just under $200,000 and go up to more than $400,000. The newest model, the F12 Berlinetta, has more than 700 horsepower and is capable of speeds over 200 mph.