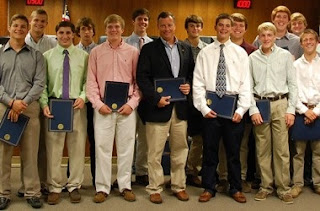 During the ceremony Lockwood, whose son Evans is on the team, recounted how the Eagles racked up state titles in 2010 and 2012.

This year, the Eagles were ranked first in the state and posted a record of 19-3, outscoring their opponents 250 to 143.