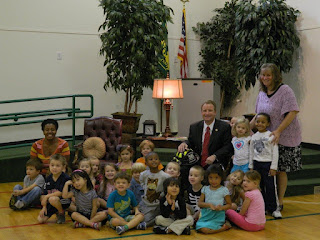 “It was an honor to witness the work that Georgia’s Pre-K program is doing to prepare our youngest learners for the challenges of tomorrow,” said Sen. Albers. “Early childhood education is essential to providing the building blocks for success, and helping Georgia’s students compete with their peers around the globe.”

During his visit, Sen. Albers participated in learning activities with the children, took a tour of the facility, interacted with staff, and received an up-close look at the many ways the center is supporting early childhood education.

“Georgia’s Pre-K is an exceptional education program that serves 84,000 4-year-olds throughout Georgia,” said Pat Willis, Executive Director of Voices for Georgia’s Children. “Pre-K is a milestone in a child’s early education. Studies show that early education programs for children age birth to five — in all income groups — will have long-term impact on a child’s education. We are proud that Georgia’s Pre-K is making a difference in the lives of so many of our youngest learners, preparing them for future success in school and in life.”

In honor of Georgia’s Pre-K Week, Sen. Albers was one of nearly 140 state officials who visited one of the approximately 3,800 Pre-K classrooms throughout Georgia.

Sen. John Albers represents the 56th Senate District which includes portions of North Fulton County. He may be reached at his office at 404.463.8055 or by email at john.albers@senate.ga.gov.

This is really worth reading, it has too much details in it and yet it is so simple to understand, Thanks for sharing the picture it has great detail in it and i really appreciate your true artistic work!