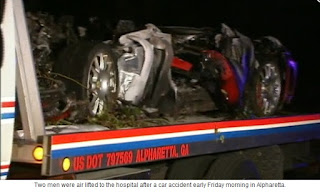 Two men were air lifted to the hospital after a car accident early Friday morning in Alpharetta.

Police say driver Akshay Panducherry, 18, and passenger Harshavardhan Patlolla, 21, were badly burned after the Ferrari they were in ran off of Webb Bridge Road and crashed into the woods near Alpharetta High School. Police say the car was going very fast and traveled 60 yards into the woods.

"We remind people – speed, speed. You got to watch your speed when traveling on the roadways of our state. High rates of speed take people's lives," said George Gordon of the Alpharetta Department of Public Safety.

Police say the men crawled out of the burning car and were trying to climb the embankment for help when officers arrived.

Webb Bridge Road was briefly shut down while crews worked to clear the wreck. It has since been reopened.