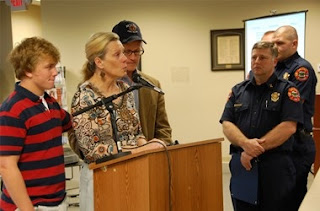 The Mills thank the firefighters who saved Barton Mills' life.

On Sept. 17 the three firefighters, at the time serving on Engine 43, responded to an emergency call of a man having trouble breathing. Within five minutes they were in the Mills’ home, where they found Barton with no pulse and barely breathing.

The firefighters immediately began CPR and started monitoring Mills, discerning his heart had stopped. They were able to get his heart beating again and assist with his breathing.

The firefighters rode with Mills to North Fulton Regional Hospital, where he was eventually released and able to return to his normal life.

At the meeting, the firefighters gave Mills a City of Milton Fire-Rescue Department hat signed by Cunningham, Barnes and Mann. They have all become close after the harrowing incident, with the Mills family spending time at Milton fire stations learning what it takes to be a firefighter.

“It’s just a great honor to be here tonight with these incredible men,” said Joanne Mills while fighting back tears. “They are people who devote themselves to the service of others.”

“I know for these gentlemen, it’s their job, but for us it was a life changing experience,” said Barton. “When my 18-year-old daughter throws her arms around me and doesn’t want to let go, I don’t know how you thank anybody for that – for giving me the gift of life.”