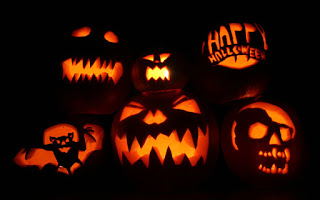 Halloween is one of the most popular holidays of the year. Many fun facts and trivia are associated with Halloween. Read on to learn ten trivia facts about Halloween.

Potatoes and turnips were the original Jack-O-Lanterns. Irish children would carve and light them to use during the gatherings on Halloween.

Trick or treating had its roots in Europe. The custom known as "souling" dates back to the 9th century. On All Soul's Day which is November 2nd, the poor would walk through the villages and go door to door begging for food. They would be given "soul cakes" which is a type of pastry made from bread and currants. They would promise to pray for dead relatives in return for receiving the "soul cakes".

Pumpkins are a major part of Halloween. They are a member of the gourd family which includes squash, cucumbers and melons. Pumpkins are a type of squash. Many people think of them as vegetables, but from a biological standpoint they are a fruit because they come from a flower and have seeds in them.

Can you think of a word that rhymes with orange? It may be a popular color for Halloween, but don't try writing a rhyming poem with the word orange. Even if you use a dictionary, you won't find any words to rhyme with orange.

Halloween is the number two holiday in terms of commercial success. It's no surprise that Christmas is number one. Over four billion dollars is spent annually during the Halloween season. The majority of that money is spent on costumes, candy, parties, and decorations.

As you can see, Halloween is a holiday rich in history, facts, and trivia. Share these ten trivia facts about Halloween with your family and friends. Have a Happy Halloween!