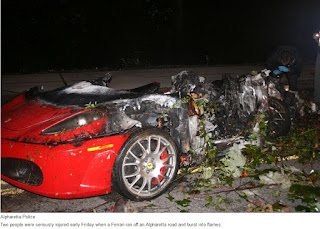 By Mike Morris and John Spink The Atlanta Journal-Constitution

The Ferrari that crashed and burned Friday morning in north Fulton, critically injuring the two people inside, was a gift to the 18-year-old driver from has father.

Channel 2 Action News reported that Akshay Panducherry, 18, of Alpharetta, who was burned over 80 percent of his body, was given the Italian sports car last week.

His passenger, Harshavardhan Patlolla, 21, of Alpharetta was also critically injured.

Alpharetta police spokesman George Gordon told the AJC that authorities initially got a call just before 4 a.m. about a possible brush fire on Webb Bridge Road near Alpharetta High School.

“Unfortunately, when our police officers arrived on the scene, they discovered the fire was actually caused by a single-vehicle crash,” Gordon said. “They found a red Ferrari that was on fire approximately 60 yards into a wood line.”

Gordon said that the two men inside the Ferrari had crawled out of the car, but had sustained “significant” burn injuries. They were airlifted to Grady Memorial Hospital in critical condition, he said.

“The vehicle itself is totally destroyed,” Gordon said. “It went completely up in flames and it basically is not recognizable as a vehicle at this point.”

“We know that a high rate of speed was a contributing factor in this crash,” Gordon said.