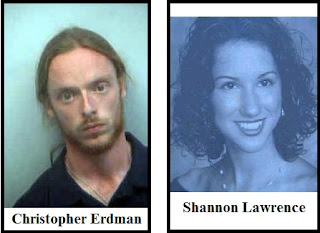 To view a video segment on this story from WSB, click here=>
http://www.wsbtv.com/video/28139369/index.html

By Mike Morris
The Atlanta Journal-Constitution

A Canton man was in the Fulton County Jail Monday, charged with killing his ex-girlfriend and mother of his two children Sunday while the toddlers looked on.

Enlarge photo WSB-TV A relative holds a photo of Shannon Lawrence, who was shot and killed during a custody exchange.

The slaying was the third deadly domestic incident of the weekend in metro Atlanta.

According to Milton police, the shooting happened around 2 p.m. Sunday when Christopher Erdman met Shannon Lawrence in the Birmingham Crossings shopping center parking lot to exchange custody of the children.

Erdman, 25, allegedly shot Lawrence, also 25 and from Canton, four times in the face and neck, then put her in the back of his pickup truck and drove her to Northside Forsyth Hospital, where she was pronounced dead.

Milton police Capt. Shawn McCarty said that when officers went to shooting scene, “they found four shell casings and a pool of blood in the parking lot.”
The children, ages 1 and 3, witnessed the shooting, according to police. The children were not physically harmed and are staying with relatives.

Erdman was arrested at the hospital and booked into the Fulton County Jail. He waived his first appearance hearing Monday morning on charges of murder, felony murder, aggravated assault with a weapon, cruelty to children, tampering with evidence and possession of a firearm during the commission of a felony, and will be held without bond until a June 20th preliminary hearing.

Lawrence's mother, Diana Macksey, described her daughter as "the most beautiful, kind, loving soul."She said her daughter was attending Kennesaw State University and planned to enter the school's nursing program.

"No mother should have to go through this," Macksey told Channel 2 Action News. "This is just all surreal. I can't believe right now that this is really happening."
Macksey told Channel 2 that Lawrence had a protective order against Erdman and the child custody exchanges were supposed to be supervised. She told the station that Lawrence and Erdman had planned to meet in a Publix parking lot, but at the last minute, he changed the location to a more secluded lot at the Wells Fargo bank in the shopping center.

A day earlier and about eight miles away in neighboring Roswell, the bodies of Kyle Webb, 50, and his mother, Wilma Webb, were discovered in her King Road home.

Roswell police said Kyle Webb, who was reportedly facing financial problems, killed his mother, then himself, after writing a lengthy letter detailing how he’d like their funerals to be handled.

In Clayton County, the daughter of a woman whose body was found in the trunk of an abandoned car on Saturday has been charged with murder along with her boyfriend.

Clayton police Lt. Tina Daniel said the boyfriend, 20-year-old Latoris Grovner, admitted to beating Alena Marble, 59, during an argument Friday night, then wrapping her in a blanket and putting her in the trunk of her car while she was still alive.

Marble’s daughter, 21-year-old Kajul Harvey, was “involved in the entire incident,” police said. Harvey and Grovner were arrested Sunday and charged with murder, aggravated assault and tampering with evidence.

Who are these people? Amazes me!

Now what kind of question is that?
Their names are listed in the article.

Trying to be condescending, aren't you?