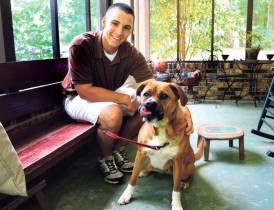 Staff / Erin Gray Zack Eller, 16, of Milton will be organizing the Milton Farmers Market this year. Eller has been running a natural dog biscuit company from his home kitchen from the young age of 6 and will also be participating as a market vendor this year. Eller is pictured at his home with his dog Duke.

At 16, Zack Eller already is a successful entrepreneur. His company, Wolf ‘Em Down Dog Biscuits, sells homemade canine treats made from natural ingredients.

Now the rising Milton High School junior has taken on a new challenge. He’s the organizer of this year’s edition of the Milton Farmers Market.

“Tim Enloe originated it three years ago, but this year he didn’t have enough time, so he passed it on to me,” Eller said. “It’s definitely not easy, but I’m having a blast doing it. I’d do it again in a heartbeat.”
Every Saturday from 9 a.m. to 1 p.m. until July 30 the Milton Farmers Market will set up at the Crabapple Community House, 12615 Broadwell Road, across the street from the Alpharetta government complex.

In keeping with the tradition of farmers markets, Eller said there will be produce vendors galore. “A ton of people sell fruits and vegetables, although we haven’t had a lot of rain lately so I don’t know how ready they’ll all be right now. But they’ll certainly be there two to three weeks in.”
Of course, Eller will be there with his natural dog biscuits, and he has encouraged other young vendors to sign up. Representatives from organizations such as the Habitat for Humanity Club at Milton High School will have wares to sell.

It’s the sense of Milton as a community Eller said he hopes to foster with the market.

“I definitely want to try to make this the place to come out to in Milton on a Saturday morning, to see people, buy fresh produce and have a great time,” he said.
Posted by Accessmilton Admin at Sunday, June 19, 2011