Some Milton Residents Hope To Put The Brakes On Speeding 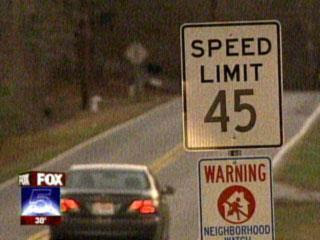 This Story content provided by FOX 5 Atlanta WAGA
Reported By: Kaitlyn Pratt Edited By: Leigha Baugham
Created: Friday, 09 Jan 2009, 12:33 AM EST
MILTON, Ga. (My FOX ATLANTA) – Some Milton neighbors tried to put the brakes on speeders and voiced their concerns at a meeting dedicated to speeding.The speed limit on one Milton street is posted as 45, but neighbors said many drivers don't obey the limit.
Tim Enloe said Bethany Road where he lives has become a commuter cut through."Much like these folks wouldn't want speeders going by their home, it's a two-way street. I don't want them speeding in front of mine," said Enloe. Enloe said his brother died in a speed-related crash a few years ago and he said he didn't want another family to hurt like his has. "Don't forget, you've got people living on these roads!" exclaimed Enloe.
To view the video, click here=>

http://www.myfoxatlanta.com/myfox/pages/Home/Detail?contentId=8219555&version=2&locale=EN-US&layoutCode=TSTY&pageId=1.1.1
Neighbors at Thursday's meeting said they were fed up with the speeding in the area. Some neighbors have taken things into their own hands and monitored speeders with a radar gun. About two dozen residents voiced their concerns at a city meeting dedicated to speeding.
"As we get complaints about speeders, the phone will start ringing about too much enforcement too," said Milton Mayor Joe Lockwood. The city of Milton has developed a program where neighbors, not police, will help slow speeders.
"We're hopefully going to engage them to help us -- not in enforcing, but in identifying," said Milton Public Safety Director Chris Lagerbloom. City leaders said they were listening to residents and were in the process of working with the state to approve lower speed limits so they could enforce them.
Posted by Accessmilton Admin at Thursday, January 08, 2009

Tim, you are going to be famous and a tv star one day. Please dont forget about us little people.

"working with the state to lower speed limits so we can enforce them."

We have lots of people to get to work. This includes people in cities farther out just as some of our citizens drive through other cities also.

Everyone wants 25 mph in front of their house, but clogging up the roads is NOT the answer and is NOT feasible. People need to work. Not everyone has the luxury to sit on their front porch and watch cars instead of going to work.

tim will have us living in 1890 before he is done

Maybe, since we don't have any money for road repair, we can just let the potholes multiply on our roads. That would be a great speed calming measure. A "win/win" for all of us.

Glad to see that this issue has created some discussion. My point is simply this. Everyone should be treated equally in this city. Thus, if there is a home on a city street, then the speed limit should be the same regardless of the location and should be enforced.

While funny, the 1890 comment just shows ignorance regarding the severity of speed related deaths. I unfortunately know all to well what can happen. I would never wish such a loss on anyone, even those who choose to cast such sarcasm my way.

Did you know that there are 43 homes just on Bethany Road alone? Someone tell me why the safety of open road neighborhood families is any less important than other residential areas?

Finally, everyone who lives here wants their property to be worth more than they paid should they decide to move on. Do some research and you will find that areas with strict speed enforcement enhances the value of related properties.

If you want to have open dialog, I am up for it. Feel free to give me a ring.

I suggest you do a little research of you own regarding speed limits and deaths. The fact is, speeding deaths are negatively correlated to speed limits.

This is a statistical fact, not my opinion.

I have done research..most likely more than you have. Feel free to share the source of your information and I will be glad to return the favor regarding my material.

Suffice to say, all you have to do is call a local insurance company and ask for the information regarding speed related deaths from the past year.

I would assume that you A) don't like treating people equally B)believe the law doesn't apply to you, and C) think that you are bullet proof.

Fact is, I WILL NOT allow my family to lose another loved one due to the lack of gov't doing their job.

Finally, I would encourage you to post your name when you make such statements instead of hiding behind a keyboard. It makes for a more respectable discussion.

Just for comparison and discussion purposes....

I would say it all depends on how the road was designed.

Going 70 mph on a 4 lane highway without sharp curves and with shoulders is completely different than going 50 on a country road with no shoulders, fairly steep grades and sharp curves.

Ummmm, people don't live on GA400. Thousands of Milton families live in our open road neighborhoods, check their mail and pull in and out of their driveways daily.
Also, people use the Milton Open road neighborhoods for biking, jogging, and equestrian use.
Hopefully, that answers your question.

Let me first state that I am sorry for Tim's loss, however, this is a subject that he chose to make public.

It is interesting that Tim has the political views that he does while at the same time advocating that the government should levy additional restrictions and taxes (yes, speeding enforcement is a form of taxation) to suit his agenda.

Hope you feel great about yourself now that you've posted the above...whoever you are.

Chicken$hi+ is my name for you

Umm-Ahhh, you are so funny! That guy who won the district 4 run-off against me two years ago put that site up while assuming so much and knowing very little. Truth be known, since I haven't seen him at any council meetings or public gatherings since Burt Hewitt wiped the floor with him, his name escapes me. I guess he really doesn't have the time as he is most likely still paying on that second mortgage of $40k to pay off his campaign loan for the mere ten months he was in office.

I also find it sad that you find fault with me due to the fact that all I am doing is asking for equal treatement under the law so that ALL RESIDENTS will be kept safe, including you and yours.

By the way, continue to post without validation. It simply justifies what readers already knew... you are afraid.

What amazes me is why do people have to be mean? We can disagree with people; But can't we do it respectfully? I doubt very much that I agree with Tim on everything. Some of them may even be big things. But am I going to call him names or run his name through the mud just to make my point.

If you are not willing or able to post your name, that is fine. But let's all be grownups and respect each other. We are far too small of a community to do otherwise.

I agree with you 100%. It is disappointing to see residents poor attempts to slam me when all I am trying to do is make our open road neighborhoods safer for all while improving property values.

On a side note, for those who are truly educated about the old college blog, half of what my former rival copied was from friends and very little of it was meant to be serious.

The speed limit on 400 is 40 - and that's if you're lucky. It's usually slower than that. I feel for anyone that has to drive that parking lot to work and back each day.

It's great to hear from "Ummm..Ahhh", or "OB" as he is affectionately reffered to. Where has he been since his historic defeat as an incumbent to Burt Hewitt last year? I still remember him bragging on how wide a margin he won the first election since he passed around that website. Maybe Tim should post the link to the public shaming of Umm...Ahh by the judge in public?

jeez...haven't you ever heard the man talk?