Milton's Gravel Roads Picturesque, but a killer on the budget 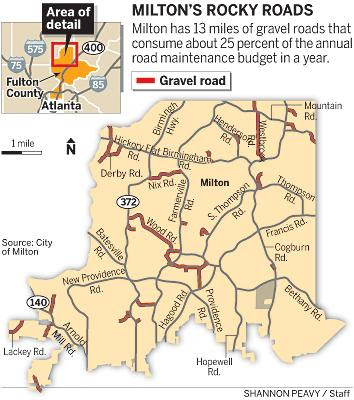 Prone to potholes, ruts, washouts
By DOUG NURSE
The Atlanta Journal-Constitution
Saturday, January 24, 2009
Gordon Hunter lives on one of Milton’s 30 gravel roads, a quaint reminder of slower days and simpler living. “I think they’re an asset to the community,” he said. “It keeps the country atmosphere, and it keeps traffic down. They’re very scenic. They’re pastoral and peaceful. If they pave it, it would change the complexion of the community.”

He’s not alone in his love of unpaved byways. The city’s Comprehensive Planning Advisory Committee lauded the gravel roads and even suggested that developers build more of them.
Public works staff recently wanted to keep gravel from migrating from gravel roads onto paved roads by adding asphalt to the dirt roads’ first 100 feet. But two city council members objected because motorists wouldn’t be able to see that it was a gravel road.
Gravel roads may be aesthetically pleasing, but they are tough on the city pocketbook. Milton’s 13 miles of dirt roads eat up about a quarter of the city’s road maintenance budget in a normal year.
“From a maintenance perspective, it’s more cost-effective to have a paved road,” said Public Works Director Dan Drake. “With a paved road, you can defer maintenance for a while. With a gravel road, there is no deferrable maintenance. You can’t defer it even for a couple of days.”
The roads are prone to potholes, rutting and washboarding as water rushes over the flat surface, carrying supporting dirt and small rocks with it. The city has to go over the gravel roads twice a year.
“People say, ‘I love your road,’ but I feel kind of guilty because the city of Milton doesn’t have much money,” said Marcia O’Shaughnessy, who lives on a unpaved road.
Gravel roads tend to be narrow so people drive over the same tracks, creating ruts.
You can fix a pothole in a gravel road by filling it with dirt, but that’s a very short-term solution. It requires grading, followed closely by a roller-compactor, followed by a truck that sprays calcium chloride to keep the dust down.
“Most cities are trying to eliminate gravel roads, because they’re so costly and hard to maintain,” Drake said.
City Councilman Bill Lusk lives on a dirt road, and likes it. “It’s why we moved out here,” Lusk said. “I grew up in the country, and it takes me back to where I was as a kid. I think if we were to try to pave them, we would hear from people who are against it.”
He said gravel roads are popular with walkers, equestrians and bicyclists because they draw less and slower traffic.
The city has included many of the roads as part of its citywide trail program as “linear parks.”
Some folks, like Rise Hersheran, who lives on gravelly Nix Road, said she would like to see the city blacktop her roadway. She said her elderly parents have a hard time navigating the potholes. “The fact they aren’t being maintained where it’s safe to drive on makes them functionally obsolete,” she said. “There’s a safety factor. There was no problem when Fulton County was in charge of it. The city can’t afford dirt roads.”
Drake estimated that up to 25 percent of all complaints he receives are over the rough state of the gravel roads. But some want the roads to look like they’ve been targeted by the Eighth Air Force.
John Lynam, who lives on unpaved Summit Road, said he doesn’t understand people complaining about gravel roads. “If you don’t like dirt roads, then why did you come out here in your Porsche and live on a dirt road?” he asked. “There’s a lot of other places you could build the same nice house. Move to a gated community. I like it because it’s close to nature.”
O’Shaughnessy said she has mixed feelings about whether to pave them, but a rugged road does have its advantages. “The condition of a gravel road is bad more than good,” she said. “If it was paved, a lot of people would use it besides residents. If the road is rough, then people have to slow down.”
Others fear that if the road is paved, their zoning will change so that instead of minimum three-acre lots, the minimum would be one-acre lots. Some of the roads’ biggest supporters are people who don’t live on them, Drake said. “If we send crews out to grade, we’ll have 10 people tell us good job, and 10 people will tell us to go away,” Drake said.
Drake estimated it would cost $2 million to $4 million to pave the city’s existing gravel roads.
He is hoping to find a compromise that would allow him to somehow cap the roads to make them water resistant, but still make them look like gravel roads.
“We can have the rural feel of the roads, but have it be closer to the maintenance schedule of a paved road,” he said.
Posted by Accessmilton Admin at Friday, January 23, 2009

Something is big time wrong here!!!!

Wasn't the main reason for creating City of Milton because we felt Fulton County (FC) was not providing adequate service for taxes collected?

Can't it be said the City is acting just like FC by spending 25% of road maintenance budget on 13 miles of gravel roads?

I was raised on a dirt road, with pot holes, ruts, no gravel and dust, without calcium chloride. Once or twice a year, motor grader would scrape road and ditches, nothing more.

Gordon Hunter fails to mention increased traffic to his tree farm causes some pot hole problems. But it is o.k. for the City to, in essence, subsidize his business.

Bill Lusk is something else, no more can be said.

Why not stop all road maintenance, gravel and paved, and let everyone be equal. This money could be used for bike paths and trails.

As long as we cater to the elitist gravel road gang, we are acting more amd more like FC, now aren't we.

The gravel roads form the core of the Milton trail system. It would costs in the tens of millions of dollars to create such linear greenspace which is used by Milton HS track, citizens of Milton etc.
The interesting part of the article was how was Fulton Co able to maintain the roads with much less?? They would grade it in a half day with one machine. The city uses several machines over many days. Also why has the city removed some of the traffic calming measures to reduce the wear and tear on the roads? The city also missspent alot of money paving the ends of the roadswhere they intersect a paved road. You can bet we are the only ones in Fulton Co with that feature as no one in the Southern part of the Co would have it.Why did the city spend money on that? The big question is not what value the roads add to the city but why has city staff chosen to spend our tax dollars irresponsibly.

I do love the gravel/country feeling in Milton but those who enjoy the benefits of dirt roads and extra tax dollars need to pay extra for that benefit.

Let them pay an extra couple thousand a year to maintain those roads and everyone is happy. The dirt road people will not mind because they would do anything to keep their country feel.

Dan Drake is not good for Milton. It is clear that his interest lies with CH2M Hill and that he could care less about maintaining Milton's rural character. He needs to get on track with Milton's citizens, or get lost.

Dan is doing his job as he is supposed to.

Of course they are going to attempt to maintain the roads, gravel or paved.

Without Dan, half this stuff wouldn't even be looked at.

He doesn't go on opinion, he goes on fact. Just think about it, of course the city wants to keep gravel roads well maintained because the city if liable if something happens and could have been prevented.

Traffic calming measures (speed bumps) and calcium chloride on gravel roads, are you kidding me?

Folks, before you comment, do some research on Calcium Chloride and it's application on gravel roads.

It certainly has my support.

You are spinning this too fast, making me dizzy. ....core of the Milton trail system; linear green space used by Milton HS track, citizens of Milton etc.

Do you live on Wood Rd? If so, please answer the following questions: Did you ever, prior to the cat being let out of the bag, complain to the city about spending too much on the maintenance of the road?
Did you complain when the county paved the west end of your road where it intersects with B'ham hwy?
Were you one of the homeowners who went before Fulton County Commission to get your road gated because there was too much cut through traffic?
So if all Milton citizens want to drive on your road or trail, is that o.k. or is it only for residents of your road?
By the way were your total 2008 County and City taxes in excess of $2,000?

Out with CH2M HILL and in with HALLIBURTON.

Out with all of them and let Julie run the whole thing!

Out with City of Milton and in with FULTON COUNTY.

The Georgia State Law above does explain things. Let me clear it up for you. A public street can not be gated. Only a private street can be gated. In order to become a private street all homeowners have to say “yes” – if one homeowner says “no” the road still has a “public” use and could not be made private. There is a way for the HOA to go in and if there covenants allow that all common property is owned by the HOA and the HOA can purchase additional common property then they could change the HOA that roads could be included as “common property” – but, in order to change the HOA Covenants it would require a super quorum which probably would mean that more than 66% would have to vote “yes” to change the covenants and a non vote would count as a “no”. It is very hard to get the required greater than 66% to even vote and they would have to have the required percentage of “yes” votes.

You're speaking of the POA...my neighborhood only has 40 homes and it took us 3 years to get 2/3 of the homeowners to agree.

Observing the map, has Darby Rd been renamed Derby Rd?