AM NOTE: The sooner Milton Georgia addresses the speeding in the open road neighborhoods, the sooner all Milton families will be that much safer. 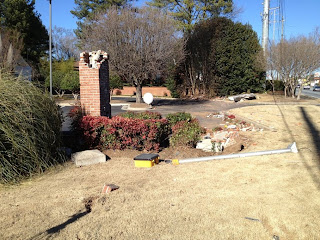 Two Marietta teens died in a single-car crash early Sunday after one of them, driving at a high speed, lost control and struck a brick sign along Sandy Plains Road, police said.

By Johnny Edwards The Atlanta Journal-Constitution

Two Marietta men died in a single-car crash early Sunday after one of them, driving at a high speed, lost control and struck a brick sign along Sandy Plains Road, police said.

The 2001 Volvo S60 caught fire, killing the driver, Stephen Nolasco, 19, and his passenger, Matthew Bennett, 18, according to Cobb County police.

Investigators want to know what the two were doing beforehand and are asking anyone with information to call 770-499-3987.

The wreck happened around 3:20 a.m., at the intersection of Sandy Plains and Kinjac Drive. Nolasco was driving north and crossed into southbound lanes before striking the sign.

“It’s just really hard to think about two really close people to me that caught on fire. I just can’t look at that tree and think, those were two close people to me. There’s debris everywhere and bricks,” said Taylor Hill, holding back tears.

Hill said she had dated Nolasco and is a close friend to Bennett. She said Nolasco and Bennett did everything together. She said the men were popular athletes who graduated from Sprayberry High School last year, and were attending Georgia Perimeter College.

Both are being remembered for their positive spirit.

“Stephen would actually walk around school when he was a senior. He would wear signs that said ‘Free Hugs’ and ‘Free Compliments’ and he would change between days because he would just really love to make people smile,’ Hill said. “Matt just always lived life to the fullest. They both were just so caring.”