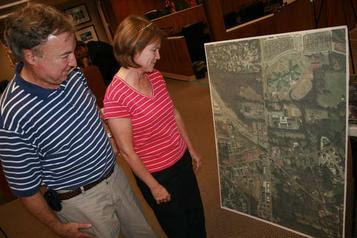 MILTON — As part of the city's overall transportation master planning process, on Aug. 24 Milton and Atlanta-based consultants Kimley Horn held a Crabapple Planning Charrette at City Hall to see exactly what citizens want.Drumroll, please: A way to drive through Crabapple in the morning or early evening rush hours without sitting for long, excruciatingly static stretches.Crabapple, with its legendary traffic due to the convergence of five heavily used roads and historic structures preventing large scale roads improvements, has been a thorn in the side of many drivers.
Faye DiMassimo, project manager of Milton's Transportation Plan and Kimley Horn consultant, said that commuter traffic — only a small portion is actual Crabapple residents — is affecting what could be a potential site for "downtown" Milton."The real issue is that commuter cut-through traffic in the a.m. and p.m.," she said. And it's only going to get worse, said Christina Pastore of Kimley Horn.
As the homes built in and around Crabapple are bought in the next twenty years, commuters are going to keep pouring onto the roads.To deal with the problem, the consultants proposed turn lanes and new road connections — though not the "robust road network" previously planned for by prior Crabapple plans. To offset those new road improvements, Kimley Horn's consultants suggested "restoring" part of the historic area.
Stations were set up in City Hall where citizens could draw what they would like to see over aerial maps of Crabapple. Concepts the consultants brought to those tables included realigning Broadwell Road and Birmingham Highway, adding crosswalks to the eastern side of Crabapple and laying down a grid of connector streets to the west.Those moves would allow for more space by historic structures, turn lanes to deal with traffic and on-street parking. "But not tear the neighborhood apart, because we realize that fabric is so important," said Pastore.Those turn lanes were of vital importance.
Clyde Johnson, who is on Milton's Transportation Plan advisory committee, said he once sat for five light cycles trying to turn on Broadwell Road."That's the worst one," chimed in audience members.
Out of the planning groups came a few concrete ideas: First, pedestrian safety is key throughout the area. Participants wanted more crosswalks and well-timed signaling.
Second, everyone agreed there is a dire need for formalized bypass routes around the main intersection in Crabapple. More green space was another popular idea.There was a mixed reaction in regards to roadway connections at nearby schools Milton High, Northwestern Middle and Crabapple Elementary.
At issue was whether more roads was worth breaking up the schools' "pedestrian fabric."The unique challenge, said Ray Strychalski of Kimley Horn, is that Crabapple is like a "tale of two cities." By that he meant there are two distinct areas sitting side by side — the old and the new — that need to be blended together. "The good news is that we usually start from scratch," he said. "But you've got a good fabric out there."And nothing was set in stone."Tonight is about vision planning, letting you dream a little bit," he said.The ideas taken from the meeting will be woven into Milton's overall transportation plan. For more information on the plan, visit the city's Web site, www.cityofmiltonga.us/transportation.
Posted by Accessmilton Admin at Wednesday, September 02, 2009