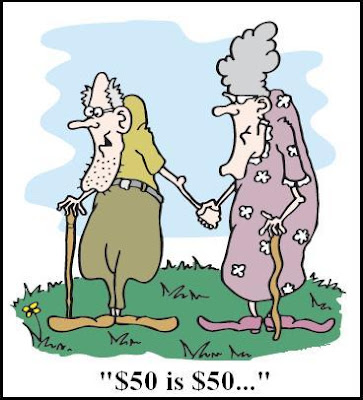 With all the back and forth debate regarding the current election, we thought some innocent humor might be a nice change of pace. With that, we are proud to share with you the story of...
$50....
Buddy and his wife Edna went to the state fair every year, and every year Buddy would say, 'Edna, I'd like to ride in that helicopter.' Edna always replied, 'I know Buddy, but that helicopter ride is fifty bucks, And fifty bucks is fifty bucks'.
One year Buddy and Edna went to the fair, and Buddy said, 'Edna, I'm 85 years old...If I don't ride that helicopter, I might never get another chance.' To this, Edna replied, "Buddy that helicopter ride is fifty bucks, and fifty bucks is fifty bucks.''
The pilot overheard the couple and said, 'Folks I'll make you a deal. I'll take the both of you for a ride. If you can stay quiet for the entire ride and don't say a word I won't charge you a penny! But if you say one word it's fifty dollars.'
Buddy and Edna agreed and up they went. The pilot did all kinds of fancy maneuvers, but not a word was heard. He did his daredevil tricks over and over again, But still not a word.
When they landed, the pilot turned to Buddy and said, 'By golly, I did everything I could to get you to yell out, but you didn't. I'm impressed!' Buddy replied, 'Well, to tell you the truth, I almost said something when Edna fell out, but you know,......'
Posted by Accessmilton Admin at Wednesday, September 16, 2009

Tim, are you sure you didnt change the names from Bill and Julie?