Three Runs Plantation: The Milton That Could Have Been? 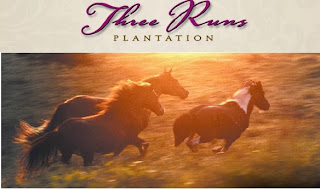 Flashing back to 2006, who can forget the buzz about unincorporated North Fulton evolving to the new City of Milton, Georgia. Pledging to "protect the rural equestrian heritage" of the area, voters voted overwhelmingly in favor of.

Flash forward to 2013, and like so many promises offered by those in political office, it is more than obvious that incorporation was about something other than keeping horses in Northwest Fulton.

More subdivisions are destroying what remains of Milton's vanishing country side like an terminal cancer as once pristine horse farms fall victim to this clustered lifestyle. Oh, and for the record, AG-1 / one unit per acre subdivisions are NOT "rural"; never have been and never will be. The names given are even more hypocritical; monikers such as "farm", "field", and "preserve." Curious also, how can a person who purchased in a subdivision that was farm not too long ago preach about "rural preservation"?

I suppose this graduation was to be expected. Since incorporation, not one elected official, current or past, has been an advocate for the initial pledge to "protect our rural equestrian heritage." There have been plenty of equestrian photo ops, mind you, but no traction to put action behind the image. They had the chance to stand out in various ways; to uphold the image professed, but none have been taken to date.

There have been many stances our elected body has taken, like requesting a four board black fence going around the new Cambridge High School, and the hours of discussion on the potential gating of a tax payer funded and owned city street.

From a public relations perspective, staff has been busy there as well! Did you know we offer yoga and have a bulky trash pick up day? Exciting stuff, no doubt, but nothing promoting horses but we do have horse pictures-don't forget those pictures!

Who can forget the botched investigation of animal abuse against my family's horse, Liberty. Having been shot with paint balls, screamed at, and fireworks shot into her pastures among other things by the same offenders, nothing was done to the guilty. As a result, we created Liberty's Law; an ordinance that would enforce and enhance laws to protect horses, but council and staff have done every thing in their power to block this proposal from even being heard; much less enacted. One council member refused to support this proposal if Liberty's name was in it; while another told us we should move our horse off of property; the very property where she took her first breaths in the early 1980's. Both are still in office. For those who believe in horse protection; there is much more exciting news from Liberty's Law to come; stay tuned.

Such a law could have easily encouraged other horse owners to move to Milton while turning our 23,000 acres into a "Little Kentucky" of Georgia; especially if the local governing body was the initial advocate. This type of citizen could have easily created a demand for a true rural / equestrian community; a community like Three Runs Plantation out of Aiken, South Carolina.

Three Runs Plantation puts action behind the image; with the smallest lots being 3 acres; this 2400 acre planned community is all about the horse and the lifestyle that surrounds it. They offer 30 miles of trails,equestrian amenities, and other benefits.  Oh, and before you assume only the extreme wealthy
can afford a farmette in Three Runs, take a look at some of the pricing and lots.

Recently, I encouraged one of our elected body to reach out to the developers of Three Runs and invite them to our home town. The goal would be to implement some of what they have put together in Aiken here. I was told by this official that he would "totally support" this. However, he told me I also needed to purchase all the land around the nine acres my family currently owns first to make it reality. Closing his comments, he states that the Three Runs Plantation approach "has to start with the property owners and not forced on (the property owners) by government." Funny, didn't the city decide about the infamous sewer map a few years back; impacting the value of one's property greatly? I don't remember those owners having a say. Another consideration, I wonder if the City of Las Vegas Nevada
promotes their city being the "adult playground" or do they keep mum about what makes them unique?

For those with a keen eye, you might have noticed that Milton Georgia is slowly, almost quietly, pulling themselves away from the horse. The new police cars have dropped any horse image whatsoever and the "Milton Round-Up" festival is now dead. No doubt more evolution is on it's away.

In conclusion, people flock to areas that are different. If it is not gambling in Las Vegas, it is the sandy beaches of Florida or the big city lights of New York. All know how important it is to stand out among the crowd; to defend the diamond within; to protect what makes them unique. Unless something is done NOW; Milton will disappear into the vast monster of suburban sprawl; leaving nothing but memories of what could have been. Remember, image without action is nothing more than a facade.

Milton should change its name to "Alpharetta-Lite."

Show me where I can buy a 3 acre lot in Milton for $20K/acre and I will buy it tomorrow. Tim, you are not living in reality. I'ts all about the "best use" of our land. If a developer can buy land in Milton for $70K/acre (typical price in Milton) and make a profit building homes on it, then our free markets and private property rights are at work. On the other hand, if an individual buys the same land and enjoys it as a horse farm, he is putting pleasure before profit. How do you suggest legislating "best use" onto private property owners? More restrictive zoning? Get the government (Milton) in the act with a bucket of cash from a "Greenspace" bond driving the prices up more? While I empathize with your frustration as a fellow Milton property owner, more whining about the situation does nothing, offer some practical solutions instead.

J - this article was written a few years ago. We have now put our property up for sale and will only sell to developers. Milton is nothing more than a land of double standards.