Milton Library gets a name . 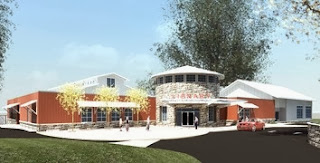 A proposed rendering of what the Milton Library will look like. Now that it has a name, the library simply needs to be built. Construction is expected to begin early next year.

The library will sit on 2 acres of land at the corner of Charlotte Drive and Mayfield Road on the historic Dinsmore Farm. The property was chosen in part because of its proximity to several schools and its road visibility.

Once the location was selected, designs were drawn up and community input was requested. The completed design was revealed to the public in March 2013. As requested by the community, the design maintained some characteristics of the Dinsmore Farm. The next step was to name the library. A naming committee was formed with six members selected from the city and the library board.

"We really just wanted to reflect the community of Milton," said Councilmember Matt Kunz, a member of the naming committee. "It's something that we're very proud of and we wanted to make sure there was a focal point of our local character, and what better way than to name it Milton?"

Councilmember Bill Lusk, another committee member, said it was proposed that a room inside the library be named after the Dinsmore family, but it was a unanimous decision to name the library after the Milton community.

In addition to being named, there has been a lot of community support for the library in the way of fundraisers. One thing the community is trying to accomplish with the funds raised is to move and restore a barn from the Dinsmore Farm so it can be converted into a facility specifically used by the Friends of the Library group. The barn will provide extra space on the premises and will add to the characteristics of the farm the community would like to preserve.

"We have a lot of people contributing in small ways to the whole," said Kunz. "It's a fun thing to be a part of.

"The way I understand it, all we need to do now [that the library is named] is get it built," said Kunz.

Sewer was extended and a historic home in "Historic Crabapple" will be raised to make way for the Milton Library. No word yet on where equestrians can teather their trusty steeds.