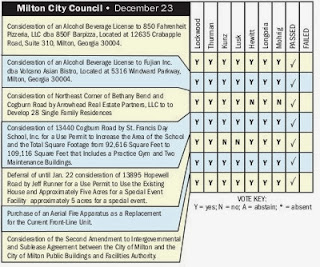 Residents say 'it's too dense'

by Caitlyn Walters / The Milton Herald

December 23, 2013 MILTON, Ga. — Milton City Council approved in a 5 to 2 vote to rezone a 9-acre agricultural lot on the northeast corner of Bethany Bend and Cogburn Road for the development of 27 single-family homes.

On Dec. 16, the rezoning was approved with the following conditions: no more than 27 total dwelling units at a maximum density of 2.97 units per acre; a minimum heated floor area per unit with a 2,800-square-foot minimum and a 3,000-square-foot average; a minimum side yard setback of 7 feet; and a minimum of seven homes with three-sided brick and 360-degree architecture.

Several Milton and Alpharetta residents told councilmembers the development was too dense and needs to be taken "back to the drawing board."

"This model is a good compromise between developers and citizens with one exception, the density," said Milton resident Laura Rencher. "It's just too much."

Over the years, the council has received applications to transform the agricultural lot into a church, then, senior facility and homes, and now a single-family home subdivision.

The council had to extend the public hearing portion of the meeting to hear all four voices in support and 13 voices in opposition.

Residents said they want to see the land developed, but not if it is going to devalue their homes and the Milton standards.

"It just flies in the face of what I thought was one of the principles for the founding of the city of Milton and part of the justification of not wanting to become just another element of North Fulton County," said Milton resident Roger Cubler. "It seems to me that it's all about the money as opposed to what the city claims is an underlying objective."

Community Development Director Kathleen Field said the developer originally wanted 28 units, but was talked down to 27 in order to build the park, buffers and fencing requested in earlier meetings.

"What people are looking for is 2,800- to 3,200-square-foot really nice houses and as little lawn as they have to contend with," said Don Rolader, representative of the applicant. "It's what you put on the ground than how far away they are from each other that is important to this market."

"Four or five years ago, we passed a sewer map, and this lot wasn't included on it," Hewitt said. "I supported that map in the past, and when there have been others that have come forward, I haven't supported those.

"For that reason, I won't support this one either, and I do think it's a little too dense," he said.