Bell Memorial to be renovated in summer 2014.

by Aldo Nahed / The Milton Herald 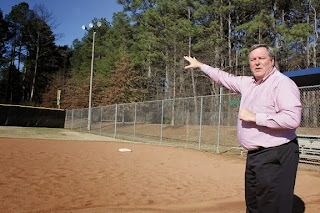 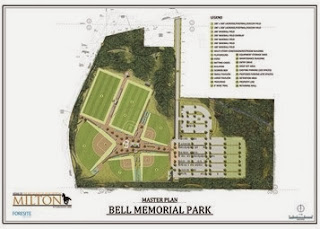 MILTON, Ga. — Bell Memorial Park is kicking up dirt this summer, but when it settles, it's going to be a better community park.

"We want this to be the premier park of the city," said Jim Cregge, the parks and recreation director for the city of Milton.

On Memorial Day, May 26, when the recreation season is finished, the park will close for about 12 months while significant improvements take place.

Cregge said the improvements will not only be aesthetic, but they will be a matter of safety.

"What you have is an unsafe situation where children are running across the park and parking lot as they are going from field to field, bathroom or concession stands," Cregge said. "We're going to do something different. The layout of the park will be different."

What parkgoers can expect with the changes that begin in June, when the bulldozers take over, include a completely renovated landscape, instead of just baseball. Two multi-purpose rectangular fields will be built to accommodate football, lacrosse and soccer.

The park will grow in size to 32 acres from the current 18 acres.

"I would have loved to have more land to build more fields, but we are doing the best with what we've got," he said.

Additions will include a large pavilion that will house concession stands, bathrooms and a breezeway to hide from rain. In addition, the park will have two new playgrounds and walking trails, with about a half-mile accessible to wheelchairs and strollers.

"The only thing we have right now at Bell Park is baseball," Cregge said. "We are trying to make the park something more than a place where your kid goes to play baseball. We want to make it a park more useful to the community."

The baseball program at Bell Memorial started 27 years ago, but the community's needs have evolved and now it's the park's turn.

"Those rectangular fields, that's the growth," Cregge said. "Baseball is not growing as fast as soccer and lacrosse."

The new park will accommodate players throughout the season.

"We are going to have more useful fields," Cregge said.

NO IMPACT TO THE BELL MEMORIAL PROGRAM

The baseball season will continue for the summer and fall of 2014 and spring of 2015.

What families need to know, Cregge said, is that even through the changes, there will be no impact to the programs offered at the park.

"Baseball will continue this season and beyond,"Cregge said. "The program will be unaffected."

Cregge said through agreements being worked out with Forsyth County, Fulton School District and city of Alpharetta, the players will have a bit of a drive to surrounding communities in order to keep playing.

"They will be leasing us some space," Cregge said. "Everything is moving forward in that regard."

Cregge, who started volunteering in the city 19 years ago with a program that teaches children to become umpires, said he had this vision for the Bell Memorial for a long time, and it's exciting to see the plan coming to fruition.

Still in the works is an entrance design that is going to be "spectacular."