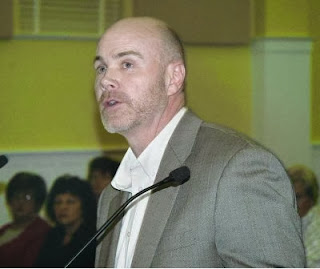 AM NOTE: City of Milton Council and Staff still refuse to give audience to the Liberty's Law Presentation; much less to even consider support.

The Fayetteville City Council on Dec. 5 heard a different type of presentation, one that asked for council members to support the attempt to have state legislation called “Liberty’s Law” adopted. The initiative would afford greater protection for horses from those who abuse them.

Milton resident Tim Enloe in the presentation said the goal of Liberty’s Law is to prevent the abuse and harassment of horses while promoting and protecting the equestrian lifestyle in Georgia.

Enloe said his horse “Liberty” in recent years stopped grazing. Liberty’s veterinarian of more than 20 years agreed with Enloe and others that something had scared her. Noting the well-known sensitivity and fight-flight response of horses to a potential threat, Enloe purchased a video camera at the suggestion of local authorities.

Enloe said he subsequently found a type of fireworks called a bottle-rocket in the pasture the day after neighbors were shooting fireworks on their property. Enloe said sudden noises like fireworks can spook horses.

Enloe said local authorities maintain there is no evidence to suggest that Liberty is being harassed or abused.

For his part, Enloe said he is promoting new state legislation, “Liberty’s Law,” aimed at limiting the discord which can arise when a new homeowner moves onto property adjacent to equestrian property. His proposal would include educating those residents on the equestrian lifestyle.

“Horses in Georgia and elsewhere have been abused, harassed and killed. These cowardly acts are increasing in number every year,” Enloe said. “Needless to say, Liberty’s Law is not just about one horse.”

If enacted in the future, Enloe said Liberty’s Law would protect Georgia’s horses and other animals from abuse and harassment, give law enforcement the ability to educate while enforcing the law, promote understanding between equestrian and non-horse owners, inform potential adjacent property owners of the law and encourage horse owners outside Georgia to move here.

Enloe is proposing a three-strike enforcement program where the first-strike would include police issuing a warning and a link to the Liberty’s Law website. The second-strike proposal would carry a $500 fine while the third-strike would carry a $1,000 fine. The third time around could also result in jail time or an additional penalty imposed by the local government, Enloe proposed.

Enloe asked the city council to consider supporting his attempt to have the new legislation adopted in Georgia. Enloe said his commitment is to travel to every city in Georgia to make the presentation and ask for support, and to have Liberty’s Law become a part of Georgia law.

During the presentation, Enloe noted a number of horse abuse cases from across the United States. One of those occurred in south Fayette County in January 2010.

Eight-year-old mare “Misty,” a horse owned by Nancy and Ralph Padovano, was found in the pasture one Sunday morning, impaled with hunting arrows. It was 17-year-old neighbor Rachel Byrd who first made the gruesome discovery.

One arrow was stuck completely through Misty’s neck and another one lodged in the upper portion of her back and above the shoulder blade in the area of her spine. There was also an entry wound, but no arrow, on the right side of Misty’s face and only inches from her eye.

“Her entire right side was covered in iced blood,” Rachel said, noting the frigid temperatures the previous night that quickly turned liquid to ice. “It was brutal. I’ve been riding since I was eight years old and I never saw anything like this.”

Arriving shortly after the discovery was veterinarian Jason McLendon.

“I couldn’t believe how deeply (one of the arrows) was imbedded. The broad-head was deeply lodged in her spine. I had to dissect a lot of nerve and muscle tissue to get to it,” McLendon said. “If it had been a few inches lower it would have been in her spinal cord.”

Misty was expected to endure permanent effects from the shooting.

Seven months later, after the investigation was completed, 17-year-old Jeremy Richardson pleaded guilty to felony aggravated cruelty to animals and misdemeanor charges on unrelated wildlife violations. A first-offender, Richardson received five years probation and future restitution for the felony and 60 days in jail and 12 months probation for the misdemeanor charges.

For more information on Liberty’s Law contact Tim Enloe at 770-653-0552 or visit http://libertyslaw.blogspot.com.

This is needed and I will show support. What is the matter with Milton council?