A Change In the Dark Of Night? 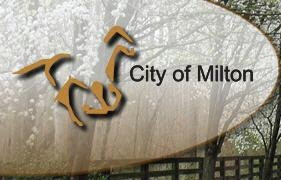 Did the City of Milton Georgia make a change in the dark of night?

Some residents notified Accessmilton.com of a recent and under the radar change; the city’s logo.

The city has not released an official statement of this assumed change nor has any local press covered the topic.

What was once a logo that was very similar to Accessmilton.com’s logo has now been replaced with a totally different horse.

The Milton Herald, the City's official news paper, actually covered the controversial story a while back.

If this is a permanent change, citizens have to wonder what additional costs tax payers will endure. Considering the original logo is on everything from police and fire vehicles, to road adoption and city park signs, to official city media, the price tag could be substantial.

We have email the Communications Director; Jason Wright, asking him to confirm if the change is official as well as the expected cost to the project.

You might want to consider giving it up for the sake of your health.

Dark of night? I guess you're referring to the last several meetings, where's its been talked about repeatedly. You know, the ones we're e-mailed about and receive the votes from if we get the city's newsletter? If that's the "dark of night," they're doing a pretty bad job of being secretive.