AM NOTE: Abuse and harassment of horses is not limited to just Milton Georgia. Support Liberty's Law to protect the beautiful horses! 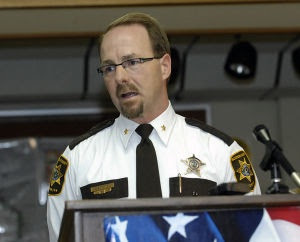 The Morton County Sheriff’s Department has taken more than 100 horses into its care after finding 96 dead horses at a ranch north of New Salem over the weekend.

Sheriff Dave Shipman said 96 of 215 horses at the ranch were dead on Saturday. The sheriff’s department received a search warrant to seize the rest of the animals. On the advice of a local veterinarian, only the animals in the worst condition will be removed from the ranch, Shipman said. He said there is adequate feed and water for the rest of the horses, and they will be cared for on scene.

“We’re in the process of doing that right now,” he said.

The case will be forwarded to the Morton County State's Attorney's Office for possible charges.

Shipman said the owner of the horses has a “soft heart” for horses and has been raising and caring for them in his retirement.

“My personal opinion is he just got in way, way over his head,” the sheriff said. “He is cooperating with us, and he realizes that there is a problem.”

“You can have abuse and neglect, and death doesn’t always result,” she said. “Sometimes, timing of lack of adequate feed and water and weather come together. That’s probably what happened in this situation.”

Shipman said his department began receiving calls about loose horses and concerns about horses not being fed on the ranch in the past month. In mid-December, local veterinarians “scored” the horses and gave recommendations on what they needed to maintain their health. A deputy responded to a welfare check last week and from the road could see two horses dead. Officials obtained a search warrant, which was executed on Monday.

“Some are in OK shape, some are in rough shape yet,” Shipman said.

Keller explained that animals need a higher caloric intake of “good quality feed” during extreme cold. All the poor quality hay in the world won’t do any good in rough conditions, while quality hay would provide the nutrients necessary for horses, she said. Keller added that owners of horses and other animals should work with a veterinarian to make sure they are getting adequate nutrition during cold spells.

Morton County Extension Agent Jackie Buckley, who has not been involved in the case, said “high-energy feed,” such as grains, can help, and adequate access to water also is important.

Keller and Buckley both said horses need access to shelter from the wind. Wind chill temperatures could dip to more than -40 this week, according to the National Weather Service.