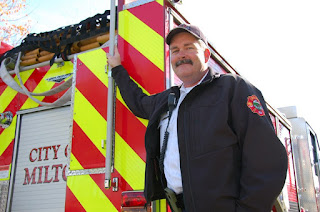 The reason is simple and profound: This year, Hutcheson and his wife, Michelle, invited into their lives twin infant boys and an 18-month-old girl, saving them from separation in foster care. The children join Hutcheson's two biological boys.

"I think Battalion Chief Roth Hutcheson is an outstanding representative of the type of person we like to honor, not only in the fire department, but in our community," said Alan Greenly, chairman of the police, fire and EMS committee for the Piedmont Chapter of SAR. "You simply can't ask for anybody better than that."

Hutcheson said his family never fostered before, but knew they had to do something when Michelle, a counselor with Coweta County Schools, learned the children were being placed in state-funded care.

"We were looking to keep the kids from being separated and provide them with a safe home while their mother re-established herself," said Hutcheson. "It's busy, it's non-stop, but we're taking it day-by-day."

Each year the Piedmont Chapter of SAR asks local fire and police departments to pick worthy nominees. Milton Fire Chief Robert Edgar said while firefighters are dedicated, compassionate men and women who put the needs of others before their own, "Roth Hutcheson and his family have taken this dedication to a new level."

"They have put the welfare and necessities of three young children above their own," he said. "This act of kindness is another clear example of Roth's great character, integrity and commitment to care for others." The designation caps a big year for Hutcheson, a 17-year firefighter. He was also named the City of Milton Fire-Rescue Department's first Firefighter of the Year at the department's awards ceremony in January.

Hutcheson has been with the City of Milton since the Fire Department launched in May 2007. He was named Battalion Chief in November 2011 after serving almost four as a lieutenant. Amazingly, in six years, Hutcheson has never missed a day of work.

For more information on the City of Milton Fire Rescue Department, click here.