AM NOTE: With the City of Milton claiming "rural" quite often and utilizing pictures of horses and a borrowed horse logo, we thought the following story might be of interest. 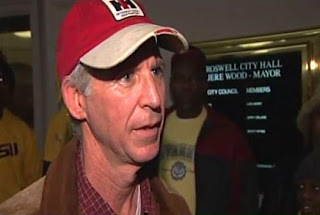 Fulton County marshals arrived at the home of Andrew Wordes at 335 Alpine Drive with an eviction notice Monday morning. Wordes warned them to back off, according to Marshal Antonio Johnson.

"We didn't go in showing force or anything," said Fulton Co. Marshal Antonio Johnson. "We just went to the door and tried to comjunicate with him regarding the eviction."

Shortly before the explosion, Wordes called a reporter to find out if his lawn was clear of law enforcement personnel. In a recording of the conversation, Wordes warns "it's not going to be pretty." The explosion took place moments later, blowing debris into the front lawn.

Investigators are trying to figure out if Wordes detonated the explosion purposefully.

According to Deputy Chief Paul Piccirelli of Roswell Fire and EMS, a body was recovered from the house. A medical examiner was expected to officially determine whether it was that of Wordes.

Friends say Wordes drained his resources fighting city hall over the chickens and other code infractions. A bank had foreclosed on his house, forcing the eviction attempt Monday.

As the controversy dragged on, Wordes became more publicly militant. HisFacebook page calls him "Andrew AKfortyseven Wordes." The site lists his favorite quote as "sometimes I think violence is underrated."