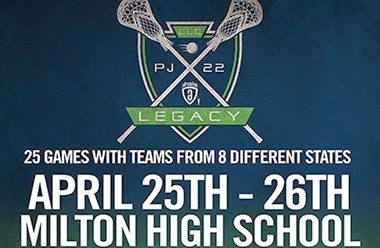 The City of Milton is proud to help present the 7th Annual Legacy Lacrosse Cup Friday and Saturday, April 25 and 26 at Milton High School.

During this popular tournament, 26 men’s and women’s elite high school teams from across the country will go head-to-head to embrace competition, develop character and honor the legacy of Milton High School lacrosse players Parker Jackson, who was tragically killed in a car accident in 2006.

Weekend tickets are $15 for adults and $5 for students. To catch all the action, check the full men’s and women’s game schedule at www.legacylacrossecup.com.

Jackson was passionate about friendship, competitive lacrosse and his spirituality, so parents Bo and Lauren Jackson started the tournament in 2007 to promote his personal values. The tournament aims to honor Jackson’s legacy by communicating to student athletes how their everyday decisions can lead them to positively influence others, said Parker’s mother, Lauren.

“To accomplish the level of success we have had is extraordinary,” she said.

This 25-game tournament features a high level of competition, with eight of the 16 men’s teams and eight of the 10 women’s teams playing in their respective state championships last year. The marquee game showcases NCAA Division I heavyweights Mercer University vs. Bellarmine University at 3 p.m.

Special thanks go to Adrenaline Lacrosse, which played a key role in the development of the Legacy Lacrosse Cup and has donated each of the 26 Adrenaline Legacy Award Winners a head-to-toe apparel pack. That award is given to one member of each team who embodies the attributes known so well about Jackson – camaraderie, competition and character.

To learn more about the cup, Parker Jackson or to volunteer, please visit www.legacylacrosscup.com or visit the cup’s Facebook or Twitter pages.