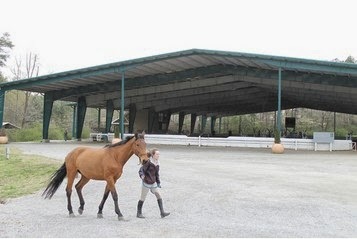 The Wills Park Equestrian Center faces an uncertain future, as the Alpharetta 2025 Recreation and Parks Master Plan calls for it to be either moved or replaced to make way for other uses, such as fields or an indoor swimming pool.

April 06, 2014 ALPHARETTA, Ga. – The Wills Park Equestrian Center is a large, 300-stable facility that routinely hosts events throughout the year. However Alpharetta is considering tearing it down.

The question of what to do with the facility has long been on the city's mind. Alpharetta Recreation and Parks Director Mike Perry said it was originally built by Fulton County, on county land, decades ago. When Alpharetta annexed it, the facility became the city's problem.

"The in 1970s, when it was built by Fulton County, it was paid for by the whole county," Perry said. "It is no longer funded regionally."

Instead, the residents of Alpharetta pay for the upkeep of a facility Perry says it is infrequently used by its own residents, even though it is used extensively on a regional basis. There are events in the arenas 142 days of the year. However, it operates at a loss of about $225 thousand a year, costing more than twice that in upkeep from Alpharetta taxpayers.

Perry noted that many of the recreation facilities and programs operate at a loss, however they add a needed quality of life to the residents.

Milton in particular is known for its horse farms and riders who make regular use of the facility.

Alpharetta recently completed a draft of a 2025 Recreation and Parks Master Plan, detailing options and needs for the city in the next decade. Included in this plan are results of a poll of 400 residents about what they would like to see in the future. Of these results, more field space for football, soccer, lacrosse and baseball are desired. However those fields require a lot of land, land of which Alpharetta has precious little left. Another option is an indoor swimming pool.

An expensive equestrian park next to the large Wills Park would be prime real estate for more fields.

Laura Bentley, who owns and rides horses in Milton, said the loss of the park would be devastating for the horse community.

"So many people go there for local shows," she said. "I think it's really important. Most [riders] start out doing local, lower level shows. Wills Park is a great venue for that."

Without the Equestrian Center, Bentley said the next closest space is in Conyers, an hour away.

"When you have to travel with horses, it gets expensive," she said.

Perry stressed there are no plans of what to do with the Equestrian Center. More public discussion – both with residents and with the City Council – will be held in the coming years before any conclusive plan is drawn up.

When I moved to Alpharetta years ago, it was horse country. That's one of the things that set it apart from the other bedroom communities surrounding Atlanta. I'd hate to see Alpharetta turned into yet another cookie cutter city with nothing to recommend it but shopping centers and car dealerships.

P.S. to the previous comment should note the city of Milton. They are not interested in accommodating any horse facility nor protecting existing horse farms. Heartbreaking.