Posting bail for a good cause in Milton and Alpharetta. 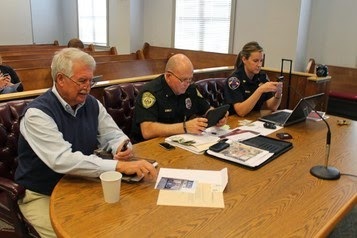 Residents were arrested and had to make bail in a fundraiser for the Alpharetta Police Athletic League. From left are Alpharetta PAL Board Chairman Jim Paine, Alpharetta Public Safety Deputy Director Keith Sanders and Milton Police Chief Deborah Harrell.

March 19, 2014 ALPHARETTA, Ga. – Most people dread the thought of ending up behind bars, but members of Alpharetta and Milton volunteered for the chance to help a needy organization March 14.

The annual Jail Break was hosted by the Alpharetta Police Athletic League (PAL). Prominent members of the community were "arrested" by police officers and taken to a makeshift jail where they called friends and family to make bail. That money will go toward PAL.

This year, the "jail" was at the Alpharetta Courthouse in Crabapple, where a dozen people manned the phones, including Alpharetta Department of Public Safety Deputy Director Keith Sanders and Milton Police Chief Deborah Harrell.

For more information about PAL, visit them online at http://www.alphapal.org.