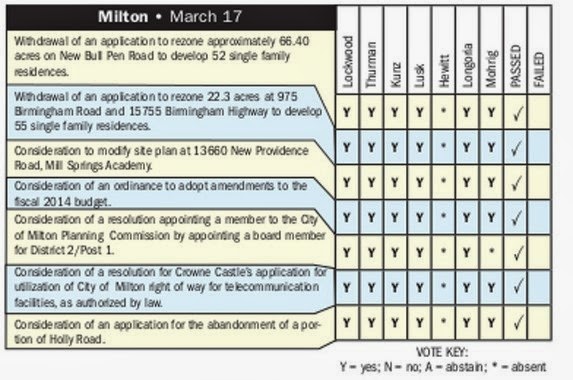 Council approved the item unanimously at their March 17 meeting, but that was just a formality.

Under state law, a city cannot refuse the request from a telecommunications company to place utilities in an area for service.

"State law allows a utility provider like Crow Castle to make an application and, if we do not approve it, state law deems it approved anyway," said City Attorney Ken Jarrard.

Houston-based Crown Castle, which owns, operates and leases towers and other infrastructure for wireless communications wanted approval to place its systems within the city's right-of-way.

There are no plans for towers, but there may be fiber optic cables installed in the right-of-way.

By approving the application, Crown Castle would still have to abide by Milton's city laws governing placement and the look of any new utility or tower.

"They must still comply with our telecommunications ordinance," Jarrard said.

Once the company has towers up and running, the city will be paid a percentage of their revenues from the towers.

Also at the meeting:

Milton officially owns most of the land in Crabapple that will one day hold its City Hall.

"This is a great thing for us and our community," Lagerbloom said. Mp> At their Feb. 3 meeting, the City Council unanimously voted to make an offer for roughly $950,000 to buy two parcels of land behind the shops on Crabapple Road, totaling 2.5 acres of land.

Motion to withdraw without prejudice by applicant approved 6-0

Withdrawal of an application to rezone 22.3 acres at 975 Birmingham Road and 15755 Birmingham Highway to develop 55 single family residences.

Motion to withdraw without prejudice by applicant approved 6-0

Consideration of an ordinance to adopt amendments to the fiscal 2014 budget.

Commission by appointing a board member for District 2/Post 1.

Councilman Rick Mohrig was absent for the vote.

Milton right of way for telecommunication facilities, as authorized by law.

Consideration of an application for the abandonment of a portion of Holly Road.