Program receives Recognition from Fulton County and State of Georgia. 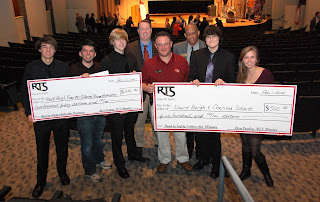 The cold rain didn’t keep competitors and supporters away from the 2011 Road To Safety Event. This year's program was held in the Alpharetta High School Auditorium on February 1st and ran from 6 to 8pm.

The Road To Safety program was inspired by the unfortunate deaths of two young men from Milton, Patrick Enloe and Parker Jackson, and this year’s program was dedicated to the memory of both of them. Their tragedy’s are what sparked this program and the idea to challenge high school students to use video to send a message to other teens and students educating them on the dangers of teen driving. Here is this years winning video by Johns Creek High School students, Christina Schmitt and David Burgh, please watch!

AN EVENING OF MESSAGE, COMPETITION, AND ENTERTAINMENT.

From there, invited Guest Speaker, Bo Jackson, father of the late Parker Jackson, spoke eloquently to the crowd about the privileges of driving and the importance of being aware at all times behind the wheel.

Then it was off to the races with the viewing of over 20 videos competing for the coveted 1st, 2nd, and 3rd place awards. Topics ranged from drunk driving to jay walking, texting, inexperience, and everything in between. Once the videos made their debut, and prior to the winners being announced, two Resolutions were read from Fulton County Board of Commissioners and the Georgia State Senate. The first was from Fulton County Commissioner Liz Hausmann, “The Board of Commissioners of Fulton county salutes and recognizes the important role of the Road to Safety Program in keeping young drivers safe in the community and does hereby proclaim Wednesday, February 1, 2012, as “Road To Safety Appreciation Day” in Fulton County, Georgia." The second was from Senator John Alber’s Cheif Of Staff, Steven Waugh, and it read "Now, therefore, be it resolved by the Senate that the members of this body recognize the dedicated efforts of the Road to Safety Program to save lives by educating teenagers on the dangers they face as new and inexperienced drivers and extend their most sincere best wishes for the future."

Next year the program intends to repeat with the same 7 schools. As for what the future holds, the ultimate goal would for this program to expand the rest of Fulton County then throughout the state, however, the focus currently is on affecting our immediate communities and making a difference right here.

For more information, this years winning videos, pictures of the event, a list of sponsors, and how to get involved for next year, please visit www.road2safety.com .

Outstanding young people. Thank you for making your community proud.

You know, David Burgh & Bryan Washington are extraordinarily purty. I tell you what.