The History of President's Day. 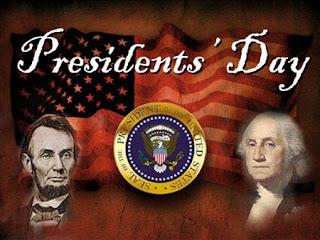 Presidents' Day is intended (for some) to honor all the American presidents, but most significantly George Washington and Abraham Lincoln. According to the Gregorian or "New Style" calendar that is most commonly used today, George Washington was born on February 22, 1732. But according to the Julian or "Old Style" calendar that was used in England until 1752, his birth date was February 11th. Back in the 1790s, Americans were split - some celebrated his birthday on February 11th and some on February 22nd.

When Abraham Lincoln became president and helped reshape our country, it was believed he, too, should have a special day of recognition. Tricky thing was that Lincoln’s birthday fell on February 12th. Prior to 1968, having two presidential birthdays so close together didn't seem to bother anyone. February 22nd was observed as a federal public holiday to honor the birthday of George Washington and February 12th was observed as a public holiday to honor Abraham Lincoln’s birthday.

In 1968, things changed when the 90th Congress was determined to create a uniform system of federal Monday holidays. They voted to shift three existing holidays (including Washington's Birthday) to Mondays. The law took effect in 1971, and as a result, Washington's Birthday holiday was changed to the third Monday in February. But not all Americans were happy with the new law. There was some concern that Washington's identity would be lost since the third Monday in February would never fall on his actual birthday. There was also an attempt to rename the public holiday "Presidents' Day", but the idea didn't go anywhere since some believed not all presidents deserved a special recognition.

Even though Congress had created a uniform federal holiday law, there was not a uniform holiday title agreement among the individual states. Some states, like California, Idaho, Tennessee and Texas chose not to retain the federal holiday title and renamed their state holiday "President's Day." From that point forward, the term “Presidents' Day” became a marketing phenomenon, as advertisers sought to capitalize on the opportunity for three-day or week-long sales.

In 1999, bills were introduced in both the U.S. House (HR-1363) and Senate (S-978) to specify that the legal public holiday once referred to as Washington's Birthday be "officially" called by that name once again. Both bills died in committees.

Today, President’s Day is well accepted and celebrated. Some communities still observe the original holidays of Washington and Lincoln, and many parks actually stage reenactments and pageants in their honor. The National Park Service also features a number of historic sites and memorials to honor the lives of these two presidents, as well as other important leaders.