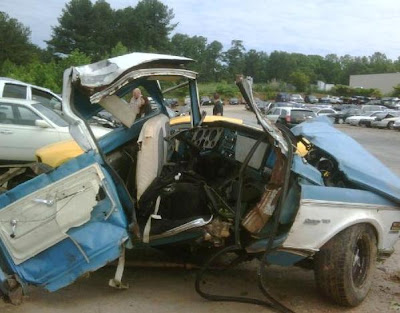 A Milton High School student was killed in an early morning wreck that injured two others, one of whom is also a student at Milton High, according to police.

Adam Stephens, 19, died in the single-vehicle wreck that occurred at 2:37 a.m. Tuesday near the intersection of New Providence and Dorris Roads, about a mile away from Milton High, said Milton Police Department spokesman Capt. Shawn McCarty.

Police say Stephens and two male teens, whose names have not been released, were riding in a 1972 Chevy pick-up truck when the 18-year-old driver lost control. The vehicle flipped at least two times, ejecting the driver and the 16-year-old male.
The two injured teens are in serious condition at North Fulton Regional Hospital, McCarty said.
No others were involved in the wreck. Police believe alcohol and speed played a role in the crash.
Posted by Accessmilton Admin at Tuesday, May 12, 2009

Pray for both families in their time of sorrow and loss.

What? Where were the parents when these kids were out joyriding past 2:30 AM?

And where did these underage kids get alcohol?

Teenagers will do what teenagers want to do. We give them a car. It's easy to take beer out of your own parents' refrigerator or liquor from the liquor cabinet. We make it easy for them. No matter the cause, people are hurting now. Pray for them.

Doesn't matter, they were still out far past curfew...they got no less than could be expected from underage drinking and driving, no doubt speeding and being wreckless too

This is a trajedy and it is one that plays out over and over again. I will pray for the families and for the survivors to fully recover.

The second commentor has a very good point, though I care little for his language. These teenagers should not have been out at 2:30 a.m. on any night, much less a school night. That is what parenting is all about.

There is way too much teenager drinking and driving and speeding in Milton and these kids are out at all times. I'm sure all of us in Milton know one or two teenagers who speed through our neigborhoods and throw out their beer bottles and we all wonder where are their parents and why are they allowing this type of behavior to happen.

This is a serious community issue and it needs to be discussed.

the second poster's language? i don't see any foul language there

if you see a "teenager" throwing out beer bottles, you should call the parents and the police because the drinking age is 21. I'd certainly want a phone call if my teen was seen drinking alcohol

Some parents don't seem to care. I've seen numerous occasions where a parent was approached about beer cans, excessive speeding, vandalism, etc. and the parent assumed their child was telling the truth when he denied it and the parent also assumed the adults were lying.

What about parents who come to their child's baseball game, band concert or graduation smelling of liquor? What about good parenting then? I've seen and smelled this so many times. It's sickening to know "good parents" are setting the example.

Probably not much can be done for these parents, but I agree with the previous post that these kids should not be out that late at night and parents should know where there kid are at. Taking the previous posts further, if a parent doesn't believe another adult, then call the police. It might save that parent from a horrible event like this and might save a life.