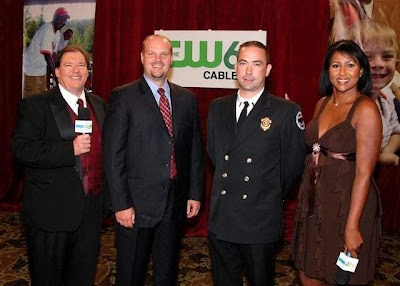 The City of Milton's firefighters, with the help of big-hearted Milton citizens, outdid themselves for the second year by raising $27,000 during the 2008 Fill-the-Boot Campaign for the Muscular Dystrophy Association (MDA). In just three Fridays, two in July and one in August, Milton's firefighters were able to collect an outstanding number of donations at intersections and other locations throughout the City.

"It has been a privilege working with MDA for the past two boot drives and I can't say enough about the generosity of the citizens of Milton," said Fire Lieutenant Chris Coker. "Our firefighters show their dedication and commitment in a number of ways, from collecting monies for charity in the summer heat to risking their lives in the heat of a blazing fire. We commend them on their hard work and selfless service."

The money raised will go towards medicine, treatment, research, and powered wheelchairs for children in Georgia affected by Muscular Dystrophy.

"Milton citizens really support our Public Safety Department and all we do," added Coker. "We are very fortunate to serve such a great community day in and day out!"