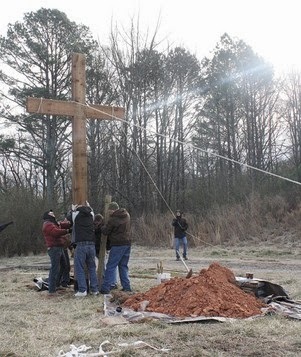 It took an hour and a half to raise the new cross on the hill. JONATHAN COPSEY/Staff.

Replaces one taken by the elements

MILTON, Ga. – It goes without saying, but a cross is important to a church. For the congregation at the Birmingham United Methodist Church, near the intersection of Birmingham Highway and Birmingham Road, they have had crosses on their minds. In the days before Jan. 16, a decade-old cross that stood on a prominent hill welcoming all visitors was blown over in heavy winds. A week later, on Jan. 25, the congregation joined together to raise a new one.

The church has existed near the crossroads for over 100 years. In the early 2000s, they acquired 62 acres near the crossroads to put up a new building. To commemorate the beginnings of the new church location, crosses were erected around the property. Standing 16 feet tall, the fallen cross was an important welcome to the congregation.

"This cross has stood over the hill since then," said congregant Jeff Johnson. "It's important to us."

Group prayers and sunrise services were frequently held in the shadow of the cross. Some people even had their ashes spread beneath it.