Tuesday, June 16, 2009
It was all smiles and hand shakes at the first official campaign rally for Milton in 2009. Held at The Olde Blind Dog Irish Pub in Crabapple, an estimated 100 plus citizens attended the event.
Coming out in support of each other include all the current incumbents who are up for re-election. They are Mayor Joe Lockwood and Council persons Karen Thurman, Tina D'Aversa, and Bill Lusk. Each echoed the sentiment of support for the other and their desire to move Milton forward while preserving it's "rural character."

Belief in one another is a long stride from the 2007 election. Lockwood and D'Aversa were instrumental in ousting former Councilmen Rick Mohrig and Neal O'brien. Both men were heavily supported by Thurman and Lusk. As it would turn out, Alan Tart and Burt Hewitt ended up taking the respected seats. Mohrig, who had initially run unopposed in the 2006 election, would only hold his seat for one year while O'brien was only placed for a mere ten months due to a run-off with long time resident Tim Enloe.
While some believe the unified support is a good move, others aren't so sure. Which begs the question: What do you think? Did the Milton incumbents make the right move or are you bothered by this approach? Have your say today in our comments section below! 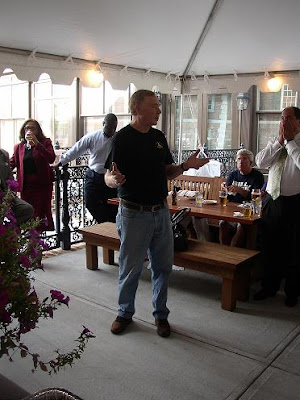 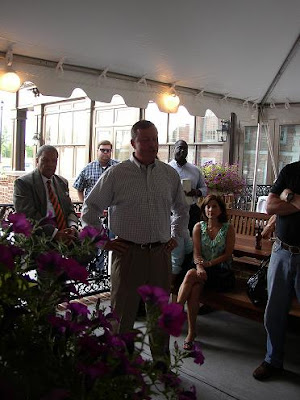 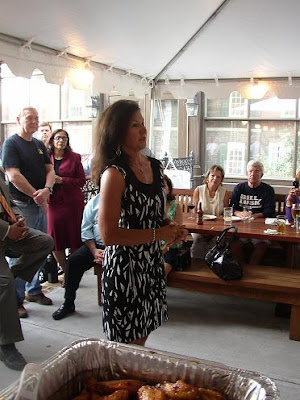 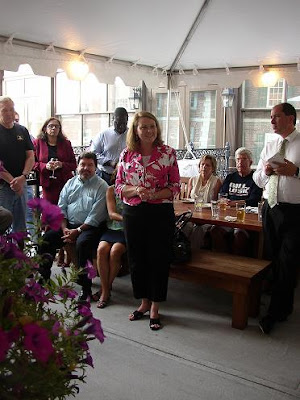 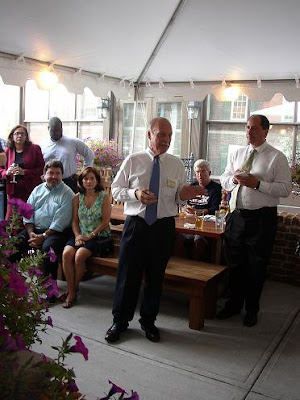 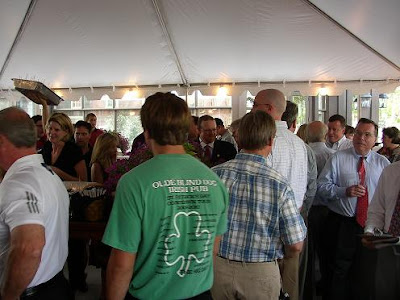 The Crowd Mingles.
Posted by Accessmilton Admin at Tuesday, June 16, 2009

I enjoyed listening to those Cobras!

I saw everyone of our elected persons there except the Tarty fellow, is he not part of the city team?

It's great to see a majority consensus in our city government. Now the team can work together to get things done!

Very disappointed in the event...nobody lifted their shirt!

Tart's not on our team.

You are correct, he plays for the other team.

How does one put aside the numerous ethic charges and accusations over 3 years and then campaign together? Bill and Karen basically wanted the Mayor removed. Whats the deal? Who's zoomin' who to try and stay in office? Politics politics politics. Can't we find somepeople who don't play the game?

If you were there to only see under Karen's skirt why did you go? Pervert.

Mature adults can put aside differences and forgive one another and themselves for their transgressions. Once you can think clearly, you are able to see the entire picture, not just your view. Compromise, people, so we can live together and get things done for all of us!

It's really very difficult to be in two places at once. Alan Tart is out of town on business. Strange though it may seem to some, his FDA job commitments do and should come before Milton City Council Elections.

Who said anything about Karen's skirt? The post says shirt.

Hey, even Julie made it so she could at least show her support for these guys, and you know she had other places to be also. Come on Tart fellow?

Mr Mayor, be careful, when Jan, Karen and Bill are patting you on the back, they're looking for a soft spot to put the knife.

This is a pure showing of the dedication of this crew to getting re-elected. No principles here! Hey, we disagree on virtually everything? No problem, come on down and let's get our picture taken at the cool new restaurant! Disgusting.

Would you rather have everyone agree on everything and just rubberstamp all issues. If so you might save the taxpayers a lot of money. The city could just have a "yes" stamp outside at a locked P.O. Box and the citizens could do self checkout?

Yeah I guess the 2nd poser above is right, it would be a lot more interesting if they all go against each other, healthier for the city also!

Where is their thinking on this, come on!

Plus the fact that Julie Bailey showed up to support the council, this means there is a working team, minus one person out on the edge, to move our city forward.

I didn't realize Bailey was there too. That is a great show of support by her for these four. I am so happy they have all come together!

@7:06 a.m. - No, if you actually read what I was saying you'd realize that I DON'T want them to all agree. In fact you're criticizing the exact opposite of what I wrote. They disagree on council meeting nights, yet they all support one another's re-election come election time. I'm anti-phoniness, not pro-political homogeny. Read before you write, dummy.

Now, now, it's not nice to call anyone dummy!

I think the "dummy" commentor is the one who lifts up her shirt to the bikers?

Could someone enlighten me as to the "lift up the shirt" remarks in this comment section and others? Why is this funny/relevant?

Lift your shirt and we'll tell you.

Yeah, they should not be supportive of each other. Not enough drama. I would be much better if the entire council didn't work together for the good of the city?

I am impressed though by what I have been reading that Julie Bailey seems to have come around a little and is working together with others somewhat. She might actually be starting to get it?

I think there's a middle ground between constant bickering and cynical vote-pandering.