Round and round we go: Milton's roundabouts near completion. 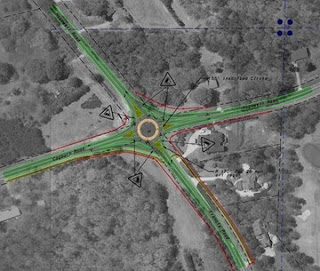 2 finished this year, another on the way

MILTON, Ga. – Anyone driving around the city lately has likely seen plenty of construction going on. Three major projects are in progress, two of which are roundabouts, something entirely new for Milton.

When cities are using federal money, the Georgia Department of Transportation (GDOT) requires the cities to look at using roundabouts. There are a few reasons for this.

"It is essentially [for] safety and operational improvements," said Milton Public Works Director Carter Lucas. "When using federal funds, GDOT requires us to evaluate the potential intersection improvement for a roundabout and to use the roundabout option where they are appropriate."

The biggest improvement roundabouts have is they reduce serious accidents. Instead of a typical intersection in which a car running a red light has the risk of "T-boning" other traffic, which can cause very serious injuries, a roundabout keeps traffic moving slower and in the same direction. It may not cut down on overall accidents, but those accidents are more likely to be fender-benders.

In addition, landscaping or public art can be placed in the center of the roundabout to beautify the intersection.

Lucas said for this year, the city is in right-of-way acquisition for a future roundabout at Hopewell Road and Birmingham Road.

The intersection projects being worked on currently are:

GDOT awarded the construction contract to CMES Inc. in the amount of $1,161,626. The job is expected to last one year.

GDOT awarded the construction contract to Bartow Paving in the amount of $2,576,297. The job is expected to last 18 months.

The city of Milton awarded the construction contract to Baldwin Paving in the amount of $786,606. The job is expected to last one year.

For more information on these projects, the city has set up a special website. Visit www.miltonintersectionprojects.com for information and updates.