AM NOTE: With speeding continuing to go widely unchecked in Milton's Open Road Neigbhorhoods due to lack of police staff, we thought the following story might be of interest. Please keep this family in your thoughts and prayers during this difficult time. 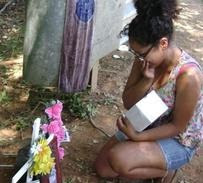 Friend Giselle Lopez spends some time at a roadside memorial on Steve Reynolds Boulevard in Norcross.

By Fran Jeffries The Atlanta Journal-Constitution

A Gwinnett County student was killed and three others were injured in a car wreck as they headed to an prom after-party shortly after midnight Sunday.

Gwinnett County police said they responded to a collision at that location in which one person died and three others were injured, but refused to identify those involved. "One of the occupants did not survive their injuries and died at the scene," Gwinnett police said in a statement. "A second occupant was transported and is listed in critical condition at this time. Two other occupants were also transported, and their injuries were not listed as life threatening."

Johlonda Lindsey -- a track and field athlete at Meadowcreek High School in Norcross -- died in the accident and other Meadowcreek students were injured, school head counselor William Blair told the AJC Sunday.

Meadowcreek Junior Keiona Henderson, 17, who said she has known Lindsey since 6th grade, said Lindsey and other students were heading to a prom after-party in Lawrenceville. She said Lindsey was a passenger in one of three cars heading to the party. She said two other girls, sisters Kendrea Walker, 16, and Caleena Walker, were injured in the accident.

Warrants have been obtained for the at-fault driver, including vehicular homicide, failure to maintain lane, three counts of serious injury by vehicle, and reckless driving, according to police.

A vigil will be held at 7 p.m. Sunday in front of school at 4455 Steve Reynolds Boulevard in Norcross.